She said: "We needed to raise £5.5million to complete the whole development. The majority of the funding was in place and the building work well underway when the trustees came on a site visit. It was fantastic when they made such a generous donation to name one of the Writers’ Rooms after Gillian Dickinson, and a huge step towards the final target. The room is used a lot, in fact the youth theatre are currently in the middle of their summer festival so some of them are in there at the moment." 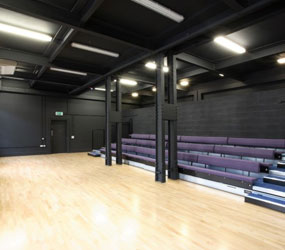 First Draft is an innovative project which uses drama to encourage young people to write. It has been running for five years, and has introduced many children living in the most disadvantaged parts of Newcastle to playwriting and the theatre. The project is run by Paul James, Associate Director of Education and Outreach at the Theatre: “First Draft is amazing. It’s about getting young people into drama and giving them a creative voice. We go to schools and run a series of workshops over 8 weeks, teaching the young people the basics of playwriting. After that, six members of the class take part in a residency here at the Theatre. Each young person is attached to a playwright, who then helps them develop their plays. It’s a fantastic project which fits in with our mission here at the Theatre to find new talent, and that’s great.“

“Without funding from the Gillian Dickinson Trust it would not have been possible to continue running the First Draft project. Their funding, over the past three years, has enabled us to perform the plays in the Theatre over three days meaning more young people can come and watch the end product and hopefully be inspired by it.”

The Theatre also benefited from a £50,000 investment to help fund a new development at their Newcastle Quayside base. Gillian Firth, Development Manager at the Theatre praised the work of the Gillian Dickinson Trust.